Best friends through thick and thin.

Malika Haqq embodied this notion on Sunday’s all-new episode of Keeping Up With the Kardashians. Not only did the 36-year-old twin pay bestie Khloe Kardashian a visit in Cleveland, but the Dash Dolls alum got the KUWTK star to open up about her rocky relationship with Tristan Thompson.

After Kim Kardashian told Malika all about Khloe’s psychic reading with a Bali-based medium, Haqq decided it was time to check in with her BFF.

“Khloe has always been really good at a brave face, but it’s also really important for me to know what’s going on with her on the inside,” Malika noted in a confessional. “I don’t want there to be a massive elephant in the room that no one’s addressing. I will be the person that she can open up to…even if she tells me to shut up, been there before.”

Even though Kardashian told Haqq that “everything’s fine,” Malika decided to address the topic once more. Of course, the Sky High actress was eager to give the Revenge Body star “an opportunity to speak her heart or go off.”

Instead of tiptoeing around the issue, Malika decided to ask Khloe point blank if she was happy. “Do you know that they say, ‘Check in on your strong friend!'” Haqq relayed to the mother of one. “You’re happy, right? You and Tristan are okay?”

Understandably, this line of questioning had Kardashian on the defensive, noting that daughter True Thompson was her main priority. While Khloe acknowledged that “it’s really hard to regain trust,” she refused to let the relationship drama affect her maternal responsibilities. 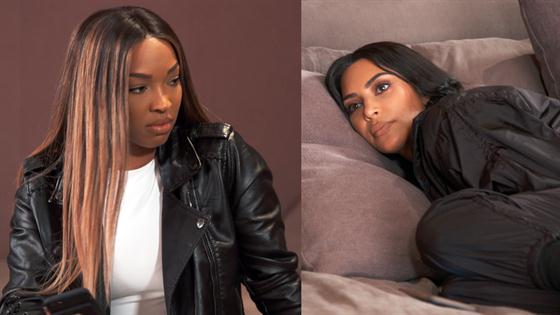 “Are you still in love?” Malika further pressed.

“I am in love. I know I love him,” the KUWTK star expressed. “But, still I’m not gonna act like nothing’s wrong.”

Still, the Good American boss suggested Tristan was eager to move on from the betrayal. “He counts, ‘It’s been 7 months’ and this,” Khloe added. “I’m like, ‘So it’s been 7 months?’ I’m allowed to do things when I want to do it.”

Although Kardashian felt that Tristan’s actions almost “demolished” their 3-year-long relationship, she confessed he had pursued “self-help and therapy”—an action she was “really grateful” for.

“He knows that I’m still trying. I don’t have to come here,” Khloe continued. “That’s a huge responsibility and a weight on my shoulders to come back and forth. And if I didn’t feel anything I wouldn’t be here.”

In fact, Khloe optimistically assured her best friend that her relationship would get to “the next phase.” Nonetheless, the E! personality appreciated Malika’s open ears and understanding attitude.

“Malika is always really wonderful with how she checks in on me and she also knows how I am and I how I deal with things,” Khloe shared with the KUWTK cameras. “I don’t know, I’ve just always been someone that’s like don’t sit in your sorrow. It is what it is, so let’s just face the facts and move on.”

Ultimately, Khloe ruled that her relationship was simply a “work in progress.”

See everything that went down on this week’s episode, including Kim’s decision to take daughter North West camping and Scott Disick opening up about his Talentless clothing line, in the recap video above!

Watch a brand new episode of Keeping Up With the Kardashians Sunday at 9 p.m., only on E!

Michelle Williams Appears to Throw Shade at Her Ex in Bitter-Sounding Tweets: ‘Dinner Is Cheaper’