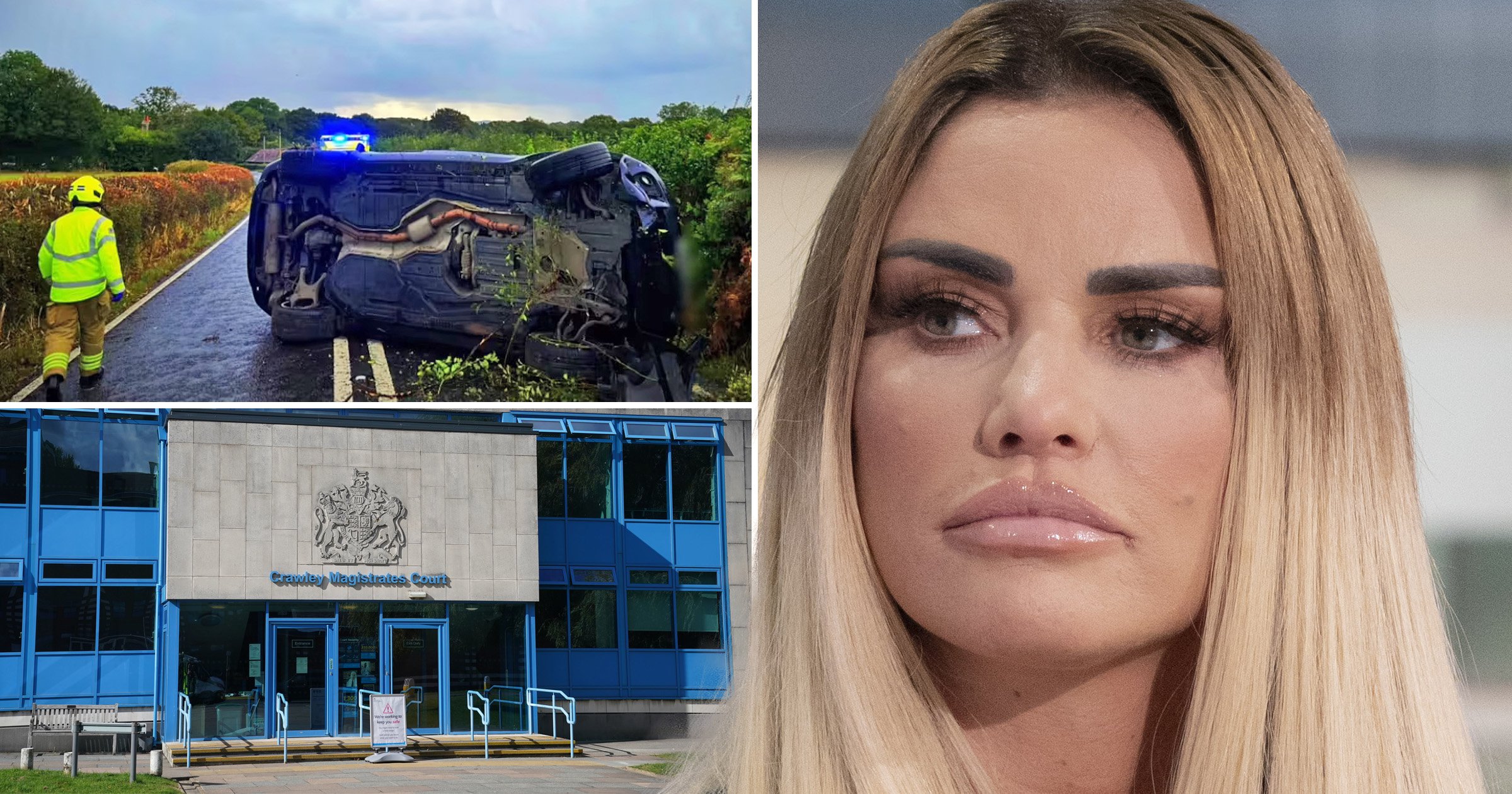 Katie Price has pleaded guilty to drink driving, driving while disqualified and driving without insurance.

The 43-year-old appeared in the dock at Crawley Magistrates’ Court following Tuesday’s single vehicle collision which saw the star arrested on suspicion of driving while above the legal limit for alcohol and drugs.

Katie sat before the two magistrates wearing a pink jumper, while two police officers in uniform were among those in the public gallery.

The court heard that after being confronted by police at the scene, Price was heard saying: ‘I took drugs, I should not be driving, I admit it all.’

Defence solicitor Joe Harrington told the court: ‘She has had a lot of personal problems recently.

‘Currently she is in the process of bankruptcy proceedings, so her house may be repossessed.

‘So, quite a lot going on in this lady’s life, a really difficult period.’

Harrington added that the driving was a ‘one-off’ incident, and said Price had been at home and feeling lonely and decided to go to see a friend.

He asked magistrates to defer the sentencing for several weeks.

After being remanded in custody, Katie, of Horsham, West Sussex, was charged with using a motor vehicle on a public place without third party insurance and driving whilst disqualified.

Following the crash on Tuesday morning, Katie was taken to hospital to be checked over.

A statement from Sussex Police said: ‘Police responded to reports of a single-vehicle collision on the B2135 near Partridge Green around 6.20am on Tuesday (September 28).

‘A woman, 43, was arrested on suspicion of driving while above the legal limit for alcohol and drugs, and has been taken to hospital to be checked over.

‘The road was blocked temporarily while recovery of the vehicle was arranged.’

Following the incident, Katie’s family issued a statement, expressing their fears for her wellbeing.

The statement shared on social media read: ‘As a family we have for some time been concerned about Kate’s wellbeing and overall mental health. Today our worst fears nearly came true.

‘As a family we have been and will continue to help Kate get the help she needs.

‘We hope that she will realise that she cannot battle her issues alone. We would kindly ask that the media and wider public give Kate the time and space she needs to seek the necessary treatment, so she can hopefully return to the Kate we know and love as a mother, daughter and sister.’

Her fiance Carl Woods posted a separate statement, vowing to support her.

The 32-year-old wrote: ‘Relationships are tested, people test each other – but when you love someone like I love Katie, you enjoy the highs and good times together, and that bond is tested during the low and difficult times together.

‘Katie is a rough diamond. She has her imperfections however they make her perfect to me, she just needs that extra help to be polished.

‘The sunlight will shine through her once again and the sparkles that she brings to everyone will return. I love you Katie 100%. My Dolly, always here, always will be.’

Adele Confesses She Eats McDonalds Once A Week Despite 100 Lb. Weight Loss Watch

Tasha K Is A Danger To YouTube! Trisha Paytas Does [email protected]! My Message To Christina Aguilera And Lady GaGa! AND&#