Jeremy Clarkson has issued some brutal suggestions to the new director-general of the BBC, Tim Davie. The Top Gear star said the broadcaster needs to realise “nobody watches” scheduled TV anymore.

That’d bring in a chunk of change

The 60-year-old spoke out in his latest column, urging them to think about peoples changing viewing habits.

He claimed “poor old” Tim, 53, was “making all the right noises” as he gave him some cut-throat suggestions.

Jeremy started: “[He’s] got to stop his populist tubthumping and start addressing the real problem with the BBC. 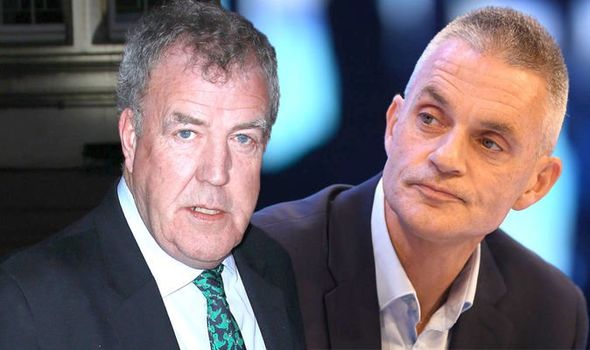 “The fact that everyone under the age of 200 is forced to pay for something they hardly ever watch.”

The small screen favourite claimed they had attempted to target a younger audience, but said they were doing it all wrong.

He continued: “Oh sure, they’ve tried to make it ‘yoof’ friendly by putting stuff on ‘apps’ and speaking ‘street’ but what’s the point of being down with the kids when the entire audience is sitting in a Shackletons wingback, wondering whether Werther’s Original tasted better in the War?”

It was then that Jeremy detailed how he would tackle the dilema, starting with the airwaves.

He advised Tim that he should sell BBC Radio One, Two and Three “immediately”, in his latest offering for The Sun.

Jeremy stated: “That’d bring in a chunk of change. Then save a fortune by closing down all local radio.”

He said the BBC should forget about scheduled broadcasting and focusing on making daytime and early morning shows.

“Nobody watches TV like that any more. We decide what we’d like to see and then we stab away on our 43 different remotes until we find it,” he said.

Jeremy also said he would merge all BBC channels with Channel 4 and make only “highquality” shows that go directly onto “clever” iPlayer.

He added: “The BBC would then become the UK’s equivalent of Amazon and Netflix.

“Would we still pay for that through a licence fee? Well, if it was significantly less than we pay now — and without afternoon TV and all that radio nonsense it would be — then I think the answer is yes.”

Meanwhile, it comes after co-star James May said Jeremy and Richard Hammond were going in the “wrong direction”, as he discussed the “sad truth” of now being regarded as “seniors”.

The presenter said he wasn’t “stuck in the past” whereas his co-hosts are going in the “wrong direction”.

James addressed the “sad truth” in a new interview when he was said to be the “sensible” one.

It came to light as he spoke to Andy Jaye on the talkRADIO’s podcast Driven Celebrities, about his role in the trio.

Andy began by stating: “You play a bit of a role sometimes, with the captain sensible thing etc. It’s not the real you, is it?”