Jenelle Evans is a Teen Mom without children to care for and she’s not feeling great about it.

On Father’s Day, the MTV icon shared a grim message on Instagram revealing that her and husband David Eason’s home was “too quiet” amid their custody battle.

The 27-year-old captioned a video of the couple’s backyard and pool with not a soul in sight on Sunday — nearly three weeks after Evans lost custody of her three kiddos after her hubby allegedly shot and killed their family dog, Nugget.

See the ghost town (below): 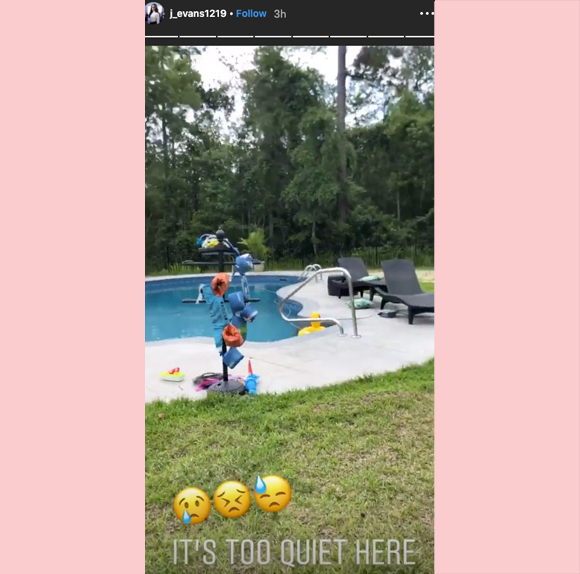 As we reported, Jenelle’s mom Barbara Evans was granted temporary custody of the reality star and pipe welder’s 2-year-old daughter, Ensley, in May after Eason admitted to fatally shooting the French bulldog. Babs is also taking care of her daughter’s 9-year-old son, Jace, whom has lived with her for most of his life.

Jenelle’s 4-year-old son, Kaiser, meanwhile, has been placed in the care of his father Nathan Griffith. Eason’s 11-year-old daughter from a previous relationship, Maryssa, was also removed from their home over the dog slaying incident and is currently living with her mother and grandmother.

The ongoing custody battle has made for a challenging time for the couple. Jenelle previously revealed that she finds it difficult to attend court hearings because she can’t take her kids home with her. She explained to E! News last week:

“It’s really hard holding my emotions together when your child doesn’t want to let you go, but if you don’t hold it together and break down it will make the child more concerned and upset.”

These emotions are apparently what caused a heated exchange to break out between Jenelle and Barbara outside a North Carolina courthouse earlier this month. In a clip, the Teen Mom 2 alum is seen coddling Ensley as Barbara quips that the toddler will “go hungry” because they only had a half-hour for a lunch break.

Addressing that widely reported argument after the video surfaced, Jenelle said to Us Weekly:

“I do feel like my relationship with my mom is destroyed at this point. This isn’t a way a mother should be treating her daughter. She fights so hard for my sister and my brother when they are the ones with major issues, not me.”

Right now, Jenelle’s only major issue is being stuck in that house alone with Eason.

We’ll see what happens when the next hearing goes down.