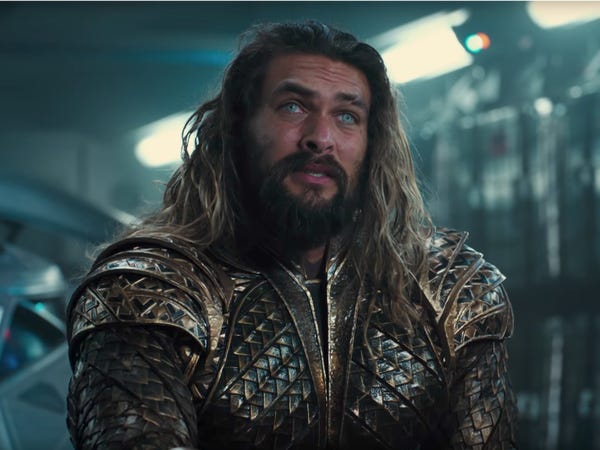 On Monday, Jason Momoa wrote on Instagram that the cast of the 2017 movie "Justice League" were treated "s—ty" during the movie's reshoots, which were directed by Joss Whedon.

Momoa, who plays the DC Comics superhero Aquaman, is the first actor from the "Justice League" movie to publicly back the July statements made by Ray Fisher, who plays Cyborg, that Whedon's treatment of the cast and crew on the movie was "gross, abusive, unprofessional, and completely unacceptable." And that it was enabled by DC Entertainment president Geoff Johns and former Warner Bros. copresident, Jon Berg.

"This s— has to stop and needs to be looked at @ray8fisher and everyone else who experienced what happened under the watch of @wbpictures needs proper investigation," Momoa wrote in his Instagram post.

Momoa also claims that the news he would be voicing Frosty the Snowman in a Warner Bros. live-action movie on the Christmas character was "fake" and purposely announced on the same day that Fisher tweeted out about Whedon.

"I just think it's f—– up that people released a fake Frosty announcement without my permission to try to distract from Ray Fisher speaking up about the s—ty way we were treated on 'Justice League' reshoots."

"Serious stuff went down," Momoa continued. "It needs to be investigated and people need to be held accountable."

Momoa then ended the post with the hashtag #IStandWithRayFisher.

THIS SHIT HAS TO STOP AND NEEDS TO BE LOOKED AT @ray8fisher AND EVERYONE ELSE WHO EXPERIENCED WHAT HAPPEN UNDER THE WATCH OF @wbpictures NEEDS PROPER INVESTIGATION I just think it’s fucked up that people released a fake Frosty announcement without my permission to try to distract from Ray Fisher speaking up about the shitty way we were treated on Justice League reshoots. Serious stuff went down. It needs to be investigated and people need to be held accountable. #IStandWithRayFisher. aloha j

Whedon (who directed several Marvel "Avengers" movies) took over the "Justice League" director reigns from Zack Snyder when he stepped down from the project after the death of his daughter. (Snyder is now currently making his own cut of "Justice League" for HBO Max known as the "Snyder Cut.")

In August, Warner Bros. announced that it was undergoing an independent investigation into Fisher's claims about Whedon, Johns, and Berg but that the actor refused to speak to the investigator. Fisher then fired back, tweeting that he met with an investigator via Zoom.

After Momoa posted his Instagram statement on Monday, Fisher tweeted out a screengrab of it and wrote: "To think they believed my brother would sell out the cast/crew of JL for a corncob pipe and a button nose …" and ended it with a hand-over-face emoji.