Home » Celebrities » It Starts On The Page: Read The Script For ‘Godfather Of Harlem’s Midseason Finale

Bumpy Johnson’s wild ride through New York’s criminal underworld continues on August 8, when Godfather of Harlem returns for the back half of its second season.

In Epix’s crime drama created by Chris Brancato and Paul Eckstein, Oscar winner Forest Whitaker plays the infamous crime boss, who wars with the Italian mob to regain control of his home turf when he gets out of Alcatraz in the early 1960s, aligning himself at the same time with Malcolm X (Nigel Thatch).

In Season 2, the series continues to examine the connection between crime, politics and systemic racism in America, then and now. The intersection between these facets of American culture is explored in depth in the midseason finale, “The Ballot or the Bullet,” which was written by Brancato & Michael Panes and which you can read in full below.

The episode sees a sense of political consciousness awakening within Johnson, as he uses his criminal skill-set to track down the men behind the Mississippi murders of three Freedom Riders.

Episode 206 was directed by Marisol Adler. Deadline brings you the script as part of It Starts On the Page, a series highlighting the scripts that serve as the creative backbones of the now-underway TV awards season. These scripts are being submitted for Emmy Awards consideration this year and have been selected using criteria that includes critical acclaim, selecting from a wide range of networks and platforms, and a mix of established and lesser-known shows.

Check out the script for “The Ballot or The Bullet” here: 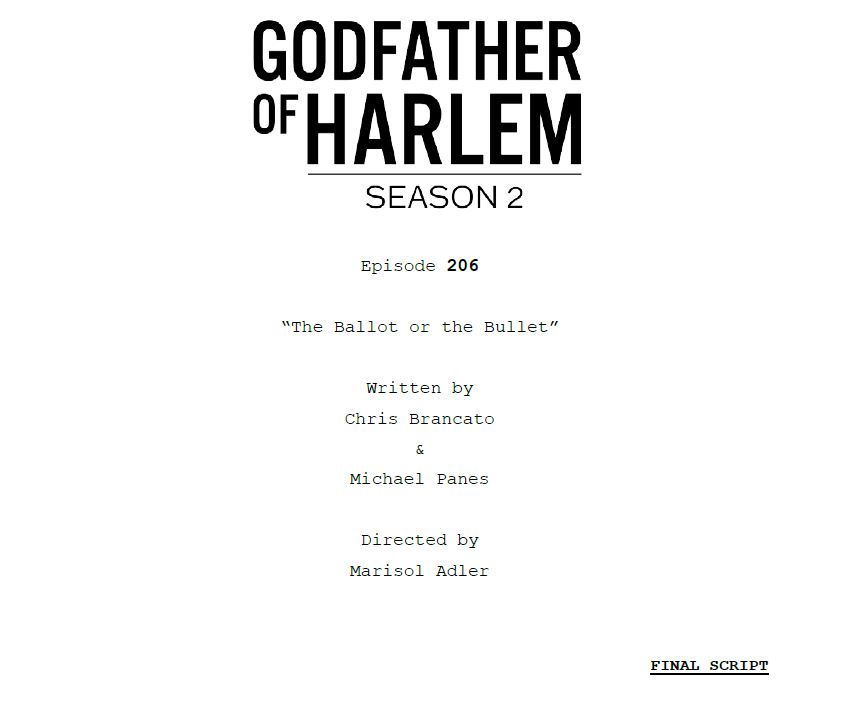 It Starts On The Page

It Starts On The Page: Read A Script From Season 2 Of ‘City On A Hill’ Penned By Emily Ragsdale

It Starts On The Page: Read An Operatic ‘Dickinson’ Season 2 Script By Alena Smith

It Starts On The Page: Read The Script For “Part One” Of ‘Your Honor’ Penned By Peter Moffat

Roger Daltrey Explains Process Of ‘Climbing Into’ New Who Songs