Home » Celebrities » Is This The Real Reason Harry And William’s Rift Will Never Be Solved?

Princes William and Harry used to be close, no cap. The brothers were inseparable even after Wills married Kate Middleton, with Harry often photographed laughing with Kate, per Hello! However, everything changed when Harry and Meghan Markle started to get serious. The Times reported that the big brother pulled aside his younger sibling and questioned the pace of Harry and Meg’s relationship. Even after the 2018 wedding, the Fab Four tried to make a go of it. But the cracks in their relationship had already started to show. Soon, they announced that they would be splitting their households and the rest was history, per Express.

Daily Mail reported that Prince William was furious when he learned how Meg had allegedly treated his staff. Someone purportedly tried to point out to Wills that difficult sisters-in-law are not a rarity. However, Wills supposedly raged, “But look at the way that bloody woman treated my staff — merciless!” The “bloody woman,” or the Duchess of Sussex, is at the center of an investigation underway at Buckingham Palace, per the Mirror. It is claimed that she bullied two senior royal staffers out of their jobs.

The Heir is also reportedly furious that Harry has been talking to the likes of Oprah Winfrey and Dax Shepard about the monarchy, implying that Wills and Prince Charles are “trapped” in the institution. Afterward, William responded, “We are very much not a racist family,” because Harry had claimed that some racist remarks were made against his unborn son. 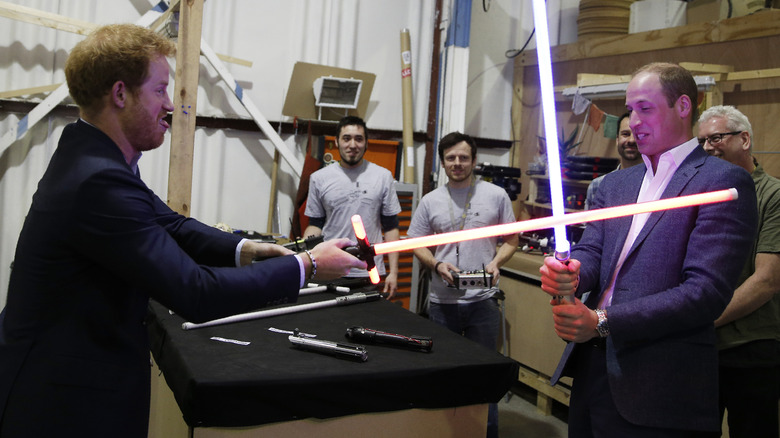 Harper’s Bazaar reported that Prince Harry returned to London in time for the unveiling of Princess Diana’s statue. He will be staying at Frogmore Cottage with his cousin Princess Eugenie and her husband Jack Brooksbank. Harry and Prince William will reunite in honor of their mother on July 1 when they remember her on what would have been her 60th birthday. However, Diana’s boys have not reconciled. Daily Mail royal expert Robert Lacey weighed in on why they haven’t been able to let bygones be bygones.

Lacey claimed that the Heir and the Spare “have a sorry tendency to dwell in the past.” William refuses to forget how “merciless” Meghan Markle reportedly treated his staff. The writer claimed that the brothers were “feeding off old grievances, with no mother around to knock their heads together — and a father whose priorities are set elsewhere.”

Lacey continued, “I’m told that Harry has been telling friends he would like to reconcile, and is willing to admit some of the missteps he has made.” Apparently, Harry wants to make peace, but it seems as if he has an Achilles heel. According to Lacey, “Then he recalls one particular insult or other, as he perceives it, that his brother or family made against Meghan, and he flares up again—ever Mr. Combustible.” Can’t the brothers make up already? Also, a playdate between their scrumptious children is long overdue.