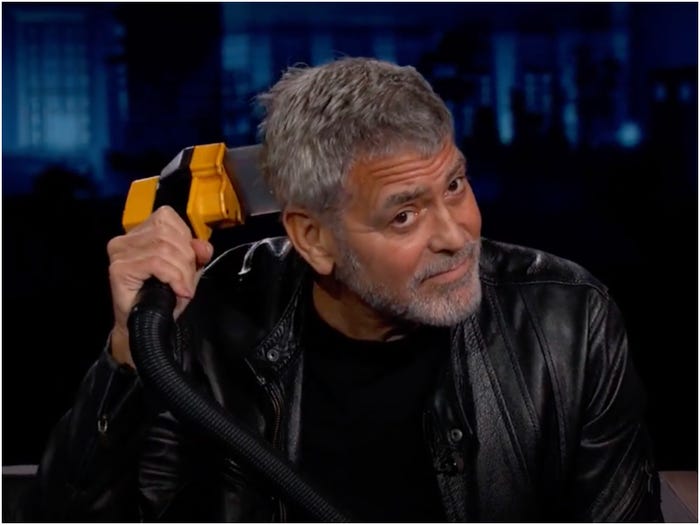 George Clooney said that his assistant used to use his Flowbee on him and joked that he didn't do it himself because "that's cheap."

Clooney appeared on "Jimmy Kimmel Live!" to talk about his new Netflix movie "The Midnight Sky," and spoke about his recent revelation during a CBS Sunday Morning interview that he has been cutting his own hair for 25 years with a Flowbee — a vacuum haircutting system sold on teleshopping channels.

Clooney confirmed this to Kimmel: "I've been doing it for many years. I've had it [a Flowbee] for 22 years. My assistant got it originally off of television, then it broke down and you couldn't get them for a while."

Kimmel joked that people who have assistants "shouldn't be Flowbeeing their hair," to which Clooney said: "I got her to Flowbee my hair for me. I don't do it myself. God, that's cheap."

Kimmel and Clooney then each got a Flowbee out, and Clooney gave a demonstration on how to use the appliance, while Kimmel cut away to an altered television commercial that had Clooney's face photoshopped onto one of the actors using the product.

"Look, my hair is really like straw, and so it's easy to cut. You can't really make too many mistakes.

"Years ago, I bought a thing called a 'Flowbee.' It comes with a vacuum cleaner and clippers. I still have it. My haircuts take literally two minutes … Listen, man, it works."

The Flowbee is an at-home hair-cutting vacuum that was created by carpenter Rick Hunts, according to Mental Floss. The appliance cuts hair and collects the hair in its canister without leaving any mess on the floor. The Flowbee sells for $99, and another kit with a "super mini vac" sells for $140 on the company's website.

Watch the full video below: