Game of Thrones Season 8: The Last War begins as Cersei and Jon bring the fight to King’s Landing in the series’ penultimate episode

The Last War has began in the penultimate episode of Game of Thrones, as Daenerys Targaryen (Emilia Clarke) has brought her remaining forces to King’s Landing to fight Queen Cersei Lannister (Lena Headey).

At the end of last week’s episode, The Last of the Starks, Dany brought her depeleted forces to King’s Landing, where Queen Cersei had The Golden Company waiting for them.

With this episode falling on Mother’s Day, fans have already been speculating that one of the show’s notable mothers on each side of this battle, will be killed. 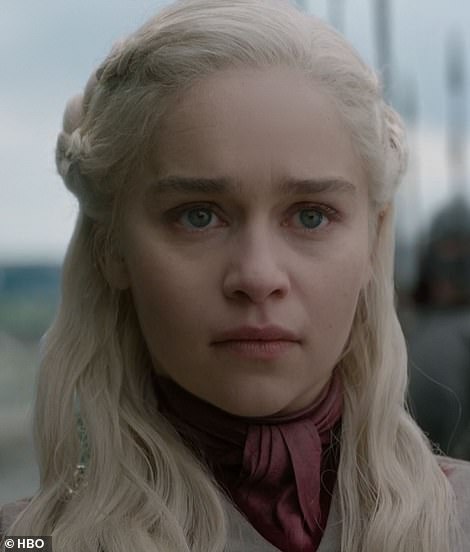 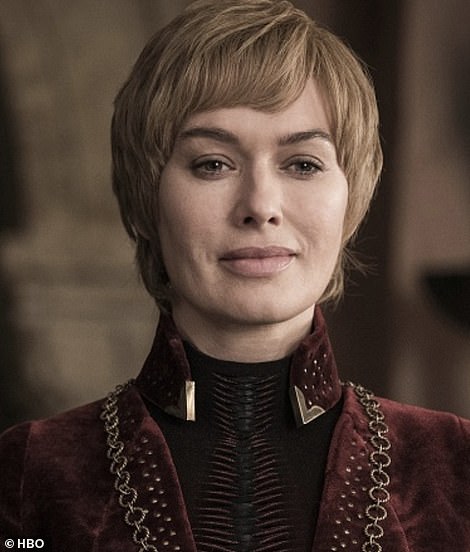 Queen vs. Queen: The Last War has began in the penultimate episode of Game of Thrones, as Daenerys Targaryen (Emilia Clarke) has brought her remaining forces to King’s Landing to fight Queen Cersei Lannister (Lena Headey)

The episode begins with Lord Varys (Conleth Hill) writing on a piece of parchment that Jon Snow is the true heir to the Iron Throne, when there is a knock on his door.

A young girl named Martha comes to the door, saying, ‘he won’t eat,’ adding she thinks ‘her soldiers’ are watching her, which Varys says, ‘Of course they are. It’s their job.’

Jon Snow arrives on the beach at Dragonstone, met by Varys, who tells Jon that she hasn’t accepted any food, and he’s worried about her.

Varys says he wants what he’s always wanted, the right ruler on the Iron Throne. He says he isn’t sure how her coin has landed, but he is sure about hers.’

Jon says he doesn’t want the throne, but Varys says he will rule wisely and well, but he won’t accept it, saying she is his queen.

We see that Tyrion has been watching this exchange from a distance, before he goes to check on Daenerys, who is seen looking out at the sea from her throne room.

Tyrion says he’s glad Sansa told him, and he’s glad Varys knows too, but Dany is not pleased at all, saying Sansa trusted her to spread secrets that could destroy her.

Tyrion says her intentions were good, and they all want a better world, especially Varys, more than anyone.

‘But it doesn’t matter now,’ Tyrion says, which Dany agrees with, before turning her back on Tyrion, and perhaps the rest of her followers as well.

Varys is writing another note, which he burns when he hears footsteps coming, as he takes off his rings as the footsteps get louder.

Grey Worm and the other unsullied soldiers lead Varys out to the beach, where Tyrion, Jon and Daenerys are waiting.

Tyrion walks up to him and says, ‘It was me,’ and Varys nods, saying, ‘I hope I deserve this, truly I do. I hope I’m wrong. Goodbye old friend,’ as he gives Tyrion a final look as Tyrion clasps his arm before walking away.

Daenerys steps up and says, ‘Lord Varys, I Daenerys of House Targaryen, first of my name, Breaker of Chains and Mother of Dragons, sentence you to die,’ as her lone dragon looms above her.

‘Dracarys,’ she says, as Rhaegal torches Lord Varys, as a distraught Jon Snow looks on.

Back inside, keeping warm by a fire, Daenerys is holding Missandei’s only possession, the only thing she brought with her when they crossed the Narrow Sea, which she gives to Grey Worm, but he tosses it into the fire.

Jon Snow approaches, and she tells him to leave so she can speak with him, which he does.

Jon tells her he doesn’t want the throne, Dany says she doesn’t have love here, she only has fear. Jon says ‘I love you, and you will always be my queen.

She comes up and says, ‘Is that all I am to you? Your queen?’ before they kiss by the fire.’

Tyrion is trying to convince Dany that thousands will die if she destroys King’s Landing.

Dany says that future generations will never be held hostage by another tyrant, while Tyrion begs her to let the people of King’s Landing to abandon the city so they aren’t slaughtered, which Dany agrees to.

Grey Worm sails off for King’s Landing, as Tyrion is about to leave, when Dany says that his brother Jaime was stopped trying to cross her lines, thinking she’s still loyal to Cersei.

Tyrion leaves with Jon Snow on a ship to King’s Landing, as they are met by Davos Seaworth (Liam Cunningham), with Tyrion telling him Dany wants the attack to start as soon as possible.

Tyrion asks Davos for a favor, saying he’s the greatest smuggler known to man, with Davos saying he’s not gonna like this favor.

Tyrion approaches the unsullied, trying to speak the unsullied language, saying he insists on speaking to the prisoner because he’s hand of the queen.

He goes to see Jaime (Nikolaj Coster Waldau), asking how he was found, as he raises his golden hand, with Tyrion saying she’s Cersei is gonna die unless he can convince her to change her course.

Jaime says he has never really cared for the people, with Tyrion saying he cares about one, with Jaime saying the child is why she’ll never give an inch.

Tyrion says the city will fall tomorrow, but Jaime hints that he will die. Tyrion wants him to escape with Brienne, telling him specific instructions of how to escape, telling him to start a new life.

Tyrion says if he does this he’ll never see Cersei again, with Tyrion asking him to swear it, and Jaime saying, ‘You have my word.’

Tyrion asks Jaime to open the gates and ring the bells so the people can escape.

‘Tens of thousands of innocent lives. One not particularly innocent dwarf. Seems like a fair trade,’ Tyrion says.

He tells his brother that if it wasn’t for him, he would have never survived his childhood, saying Jaime was the only one who didn’t treat him like a monster.

They embrace and cry before Tyrion hurries out, leaving Jaime to ponder everytyhing.

In King’s Landing, the Golden Company fleet is preparing for the battle at hand, with Euron Greyjoy (Pilou Asbaek) looking out to sea, while other soldiers are prepping the dragon-killing crossbows on the ramparts.

After Daenerys and her forces prevailed over The Night King and his army of White Walkers, she turned her attention south to King’s Landing.

While her forces have certainly been diminished in the massive Battle of Winterfell, she still made it south to stake her claim to the Iron Throne.

Qyburn (Anton Lesser) was sent out to try and arrange a surrender, but it was Tyrion who demanded Cersei surrender, though, naturally, she refused, through Qyburn, to do so. 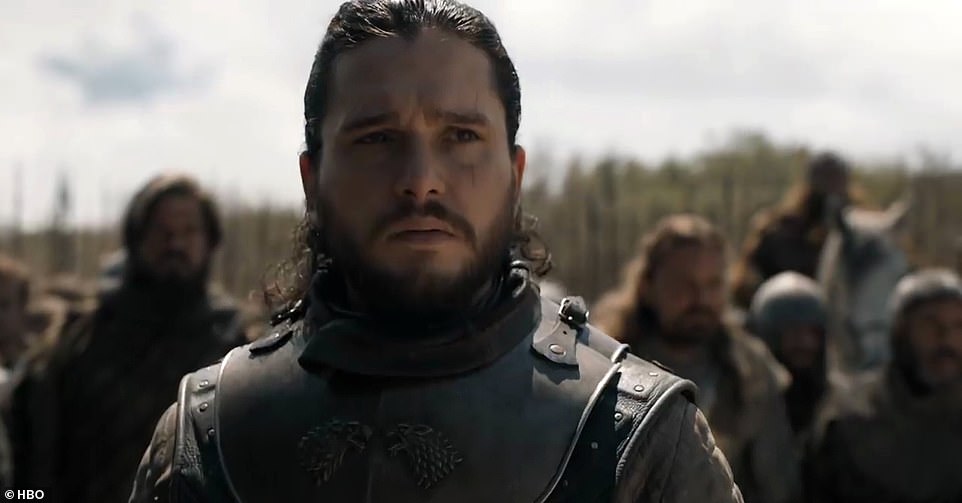 Jon’s battle: Qyburn (Anton Lesser) was sent out to try and arrange a surrender, but it was Jon Snow (Kit Harington) who demanded Cersei surrender, though, naturally, she refused, through Qyburn, to do so

After The Last of the Starks, HBO debuted a brief trailer for the penultimate episode, and while the trailers are typically quite cryptic, revealing very little, this one for the upcoming episode was more cryptic than most.

The trailer showed Daenerys back at Dragonstone, looking rather desolate, as Tyrion approaches, while another shot shows Cersei looking out over King’s Landing.

Jon Snow, Tyrion Lannister (Peter Dinklage) and Davos Seaworth (Liam Cunningham) are seen watching their forces from an elevated position before the battle begins, while Euron Greyjoy (Pilou Asbaek) is seen watching from a ship. 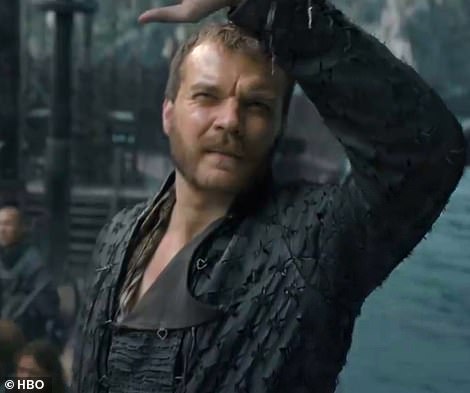 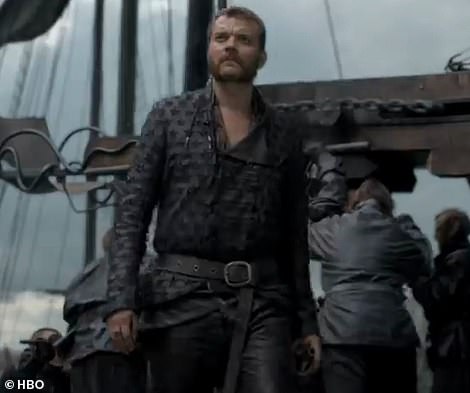 The trailer also showed a few shots of Grey Worm (Jacob Anderson), who lost his beloved Missandei (Nathalie Emmanuel) to Queen Cersei, along with soldiers from The Golden Company.

One of Queen Cersei’s massive dragon crossbows is seen being loaded from one of the castle ramparts, which could be a hint that her last dragon, Rhaegal’s days could be numbered.

Dany’s dragon Drogon was killed in a surprising attack at the end of The Last of the Starks, leaving her with just the one dragon Rhaegal, out of her original three dragons. 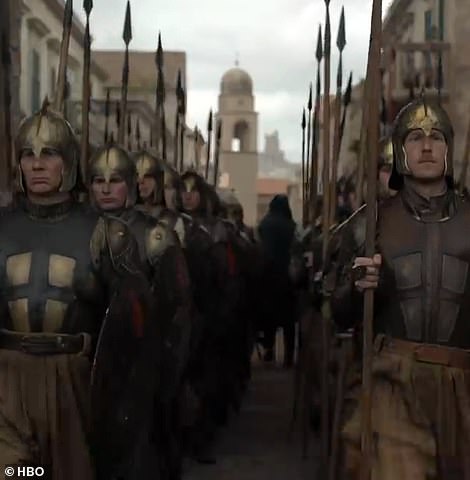 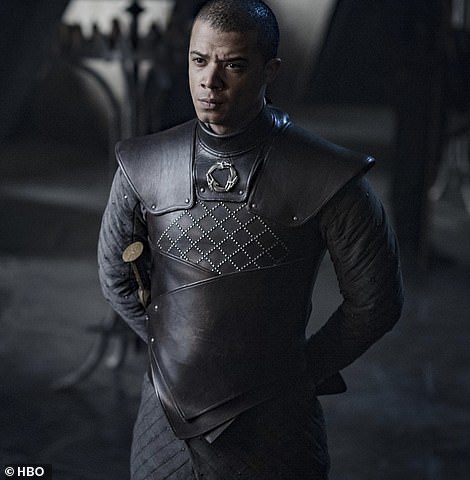 Golden and Grey: The trailer also showed a few shots of Grey Worm (Jacob Anderson), who lost his beloved Missandei (Nathalie Emmanuel) to Queen Cersei, along with soldiers from The Golden Company 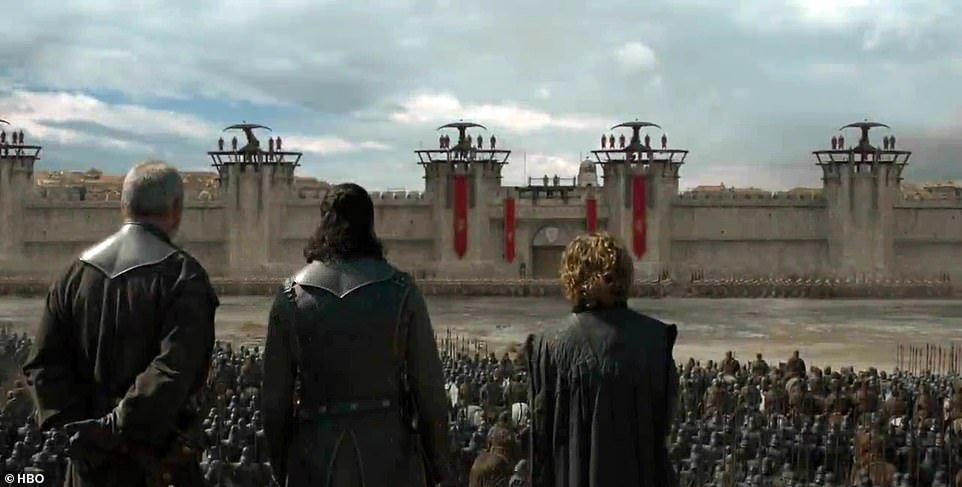 The trailer ended with Euron squinting at the sky, as Rhaegal’s screech can be heard, though we don’t get to see the dragon attack in the trailer.

Last week’s episode, The Last of the Starks, set a new viewership record for the series, with 17.8 million viewers tuning in.

Both tonight’s episode and the series finale on May 19 have been confirmed to be 80 minutes long, bringing this epic series to a close. 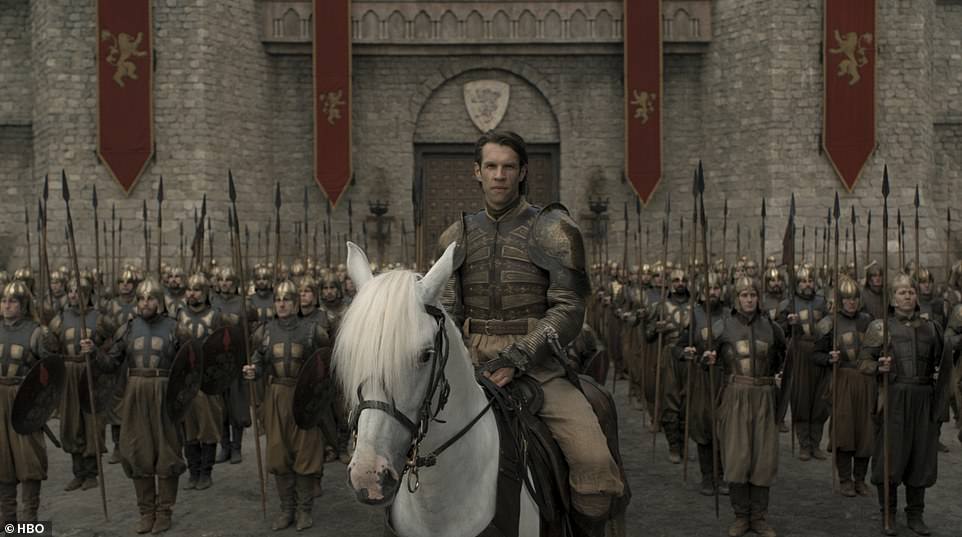 Last week: Last week’s episode, The Last of the Starks, set a new viewership record for the series, with 17.8 million viewers tuning in 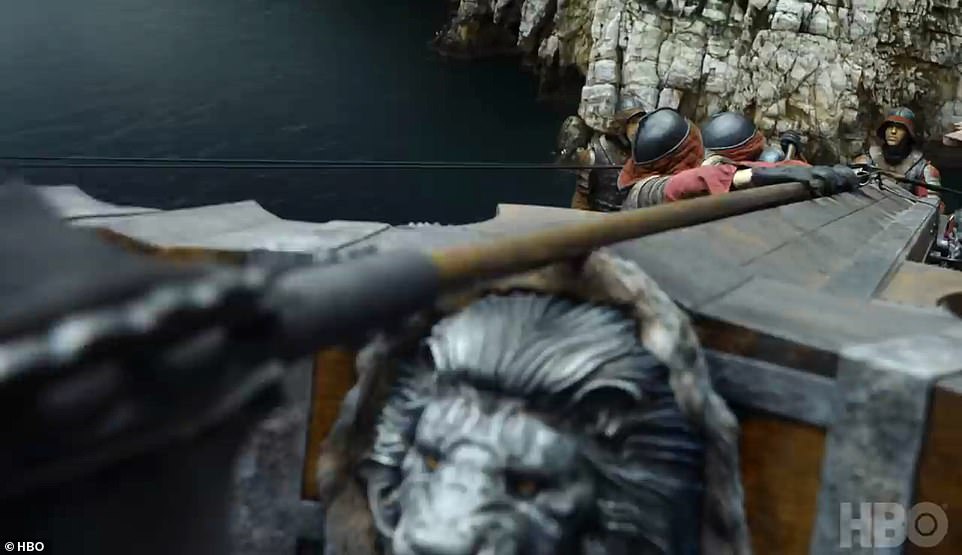 Crossbow: One of Queen Cersei’s massive dragon crossbows is seen being loaded from one of the castle ramparts, which could be a hint that her last dragon, Rhaegal’s days could be numbered