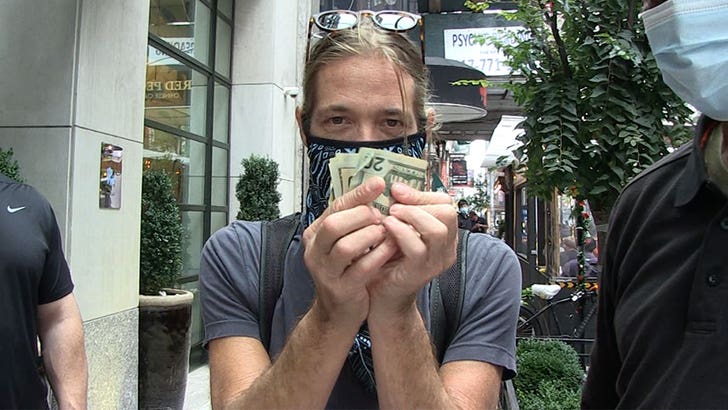 When the Foo Fighters roll outta NYC, Taylor Hawkins‘ pockets are gonna be a little bit fatter because he’s struck a deal — a not-so lucrative one — with autograph seekers.

We caught the drummer as the band was leaving their hotel, and witnessed some cold hard capitalism going down as a handful of guys moved in for Taylor’s signature. This was no free-for-all, though — in fact, it kinda sounded like an auction.

You gotta see it … autograph seekers start shouting out dollar amounts to get Taylor’s attention. Someone offered $40, and TH beelined for him, and signed a photo. We know what you’re thinking — why the hell does a rock star need the few extra bucks???

Well, we put that question to Taylor, and he explained … it’s all about avoiding ATMs and keeping his wife happy. Smart man!

He says there’s no going rate, BTW … seems like he’ll take whatever they offer, as long as it’s legal tender. Taylor jokingly tried to school guitarist Pat Smear on the art of the deal too — he needs the help.

And, before you think Taylor’s getting rich off this racket … watch the video. Dude’s just having some fun on the road.

Kristin Cavallari & Jay Cutler’s Divorce Is Reportedly NOT Due To Infidelity: ‘This Isn&#8217