The Duchess of Sussex‘s close friend Delfina Blaquier has praised the working mom for being “so wonderful,” admitting that Meghan is “stronger than she knows”.

The Duke of Sussex and Argentinian polo player Nacho Figueras have been friends for over 15 years, and Harry has known Delfina all that time. After the Duke and the Duchess moved to the US, they became even closer with Nacho and Delfina, an Argentine socialite and businesswoman, and earlier in 2022 Delfina revealed that Meghan calls the pair the “p-wives”, or polo wives.

Delfina was at the Aspen Valley Polo Club on Thursday 25 August to support her husband and Harry as they took part in the annual Sentebale ISPS Handa Polo Cup, a key fundraiser for the charity founded by the Prince in 2006.

She spoke to HELLO! after the pair’s jubilant win following the thrilling tournament, revealing that “it is always important to support Sentebale, and to show my husband support”.

Speaking of her blossoming friendship with Meghan, Delfina added: “She is so wonderful and strong. Stronger than she knows. “I love being around my friends, and I will always support her.”

Nacho also praised the relationship with Meghan and Harry, sharing: “I have known him for so long and he has always wanted someone to love and marry and have a family with, so it makes me so happy to see them happy and with two beautiful children.”

Delfina joined husband Nacho and Harry at the tournament

In June, Delfina took to social media to share a picture of herself and Meghan watching their husbands play polo – Harry joined Nacho’s Californian polo team Los Padres in May – and captioned the post by referencing her nickname for the former actress and Harry, revealing that she calls them ‘M’ and ‘H’.

“M, looking forward to many more of these times with you and H,” Delfina wrote, adding: “Getting to spend time together over these 2 months was so special. I wish everyone knew you the way you are.” 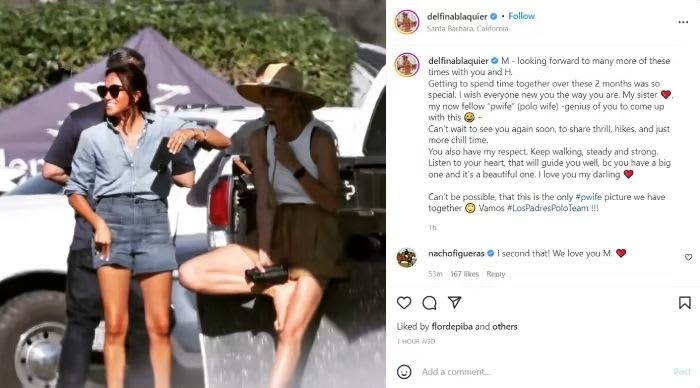 The podcast has been well received worldwide and will follow Meghan as she “investigates the labels that try to hold women back”.

The first episode featured an interview with Serena Williams, and the two ladies discussed their pregnancies, motherhood, and the stereotypes that women face.

They also spoke about the double standards women experience when they are labelled as “ambitious” – and how it has impacted their own lives.

Cheryl Burke Speaks Out About Her Struggle With Sobriety

New Year’s Day 2020: What Restaurants Are Actually Open On The Holiday