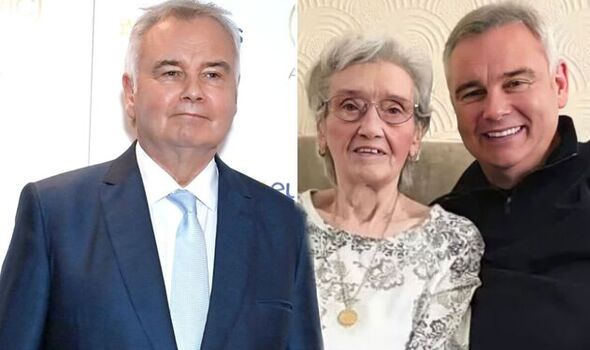 Due to health reasons, Eamonn Holmes was unable to attend his mum’s funeral in Belfast today, but spoke virtually to the congregation to pay a loving tribute. The 62-year-old’s mum was remembered by her loved ones, including Eamonn’s brothers, at Saint Patrick’s Church, Donegall Street.

According to the Belfast Telegraph, he made a touching speech heard by those in attendance.

He said: “Thank you for being there today on what is a work day.

“My name is Eamonn and I am the second son — my other brothers being Emmett, Connor and Leonard Holmes — of Josie.

“They are all here today and I love and respect them so much for what they constantly do for mum.

“Unfortunately I can only be here virtually but I am watching it on the television.”

The GB News presenter went on to say his mum had given him her “blessing and understanding” for his decision not to attend her funeral.

He added: “A few weeks ago she said to me she didn’t want me at her funeral anyway.

“That is what she said… ‘Because you would just turn out to be the the fella in the big picture — it would all be about you’.”

Eamonn Holmes discusses his recovery from back surgery

He said of her funny words: “They don’t make them like you Josie.”

The broadcaster also described his mum as “the best” not only as a mother, but also as his dad’s wife.

Eamonn was inundated with condolences from many of his fans after sharing the news of his mother’s death last week.

He added: “We loved and will miss her so much. Every time I visited her she came to the door to bless me with Holy Water and Wave goodbye.

Eamonn was unable to attend the funeral due to being in recovery following a string of health issues.

The broadcaster has been suffering from chronic pain for several months but was dealt a new health blow earlier this month.

The broadcaster was left with a fractured shoulder following the tumble at his Surrey home.

The accident meant Eamonn had to undergo a second operation within the space of just a few weeks.

He currently remains on a break from his presenting duties on GB News.

A spokesman for the star told Express.co.uk this month: “Eamonn’s focus now is solely on resting, and getting better – which he is determined to do.”

Valerie Bertinelli Says She's Working on a New Memoir: 'I’ll Be Sharing Some of the Wisdom I’ve Learned Along the Way'