On Twitter over the weekend, the legendary songstress felt the need to share how “violated” she was left feeling after an apparently aggressive pat-down at the airport following her performance at the New Orleans Jazz & Heritage Festival.

While the 75-year-old was appropriately “treated like royalty” during her time in the Big Easy, she was apparently treated like “s**t” when she arrived at the airport and endured an “over the top” encounter with a female TSA agent who allegedly placed her hand between the singer’s legs.

Explaining how the endless interaction made her “want to cry,” she wrote on Sunday:

The I’m Coming Out artist then elaborated on her experience, noting that it was not Delta Airlines or the “people” who rubbed her the wrong way, but the TSA agent who allegedly aggressively placed her hands between Ross’ legs — and argued that she was just doing her job. 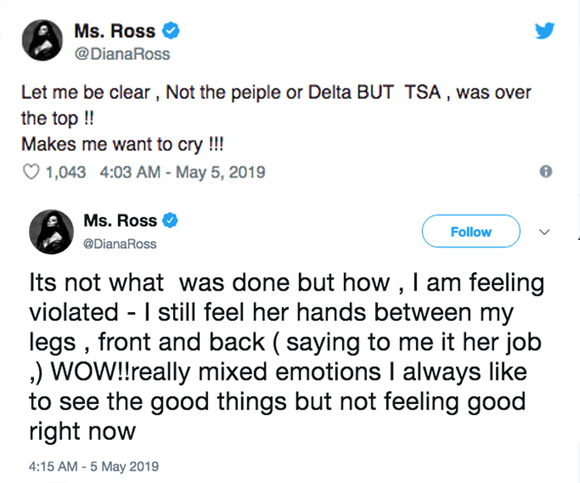 Wow. Sounds like she’s really traumatized by all this!

According to the Transportation Security Administration, however, the allegedly handsy agents “correctly followed all protocols.” After reviewing CCTV footage of the encounter with Ross, a TSA spokesperson said in a statement:

“TSA is committed to ensuring all travelers are treated with respect and courtesy. TSA is aware of concerns presented by Diana Ross about her screening experience at Louis Armstrong New Orleans International Airport this morning. Initial review of CCTV indicates that the officers involved with Ms. Ross’s screening correctly followed all protocols, however, TSA leadership will continue to investigate the matter further. We encourage Ms. Ross to reach out to TSA so we can work with her directly to address her concerns.”

Thankfully, Ross revealed she was “feeling better” after venting about the experience.

Sharing a video of her singing The Supremes’ Stop! In the Name Of Love — which could arguably be another message to the allegedly handsy agent — she tweeted:

This isn’t the first time the star has clashed with the TSA. In 1999, she was arrested at London’s Heathrow Airport after getting into an altercation with a female security guard whom Ross claimed touched her inappropriately.

She said at the time:

“I travel a lot. The security checks usually use metal detectors. This woman went all around my body and up and down my legs. I felt very uncomfortable. I wanted to complain, but no one listened to me.”

In the heat of the moment, Ross asked the guard how she’d feel in the situation and touched her, prompting the guard to complain and the singer to be arrested.

Thankfully, Ross managed to save her rage for Twitter this time around.