Conor McGregor threw the first pitch at the Chicago Cubs game on Sept. 21, and it didn’t go well for the UFC fighter, to say the least.

It’s been a rough month for Conor McGregor. First, the 33-year-old UFC champ got into a messy brawl with Machine Gun Kelly, 31, on the red carpet at the MTV Video Music Awards on Sept. 12. Then on Tuesday (Sept. 21), Conor threw the ceremonial first pitch at the Chicago Cubs game against the Minnesota Twins at Wrigley Field — and the result proves that Conor definitely doesn’t have a future in the MLB. Yep, the throw was that bad. See it for yourself below!

Conor’s pitch was just chaotic, to put it simple. He seemed fairly focused when he stepped on the pitchers mound, ready to catapult the ball to Cubs infielder Patrick Wisdom, who was at home plate. But Conor ended up throwing the ball way off-course and towards spectators far to the right of the intended target. Yep, not good at all!

Luckily, Conor seemed to be in good spirits after the disastrous throw. He laughed off the failed first pitch and shook hands and chatted with Patrick, who had to retrieve the ball after Conor’s wild throw. On the bright side, Conor looked good during the unforgettable incident: he wore a light-colored suit and black shoes. At least he showed up in style! 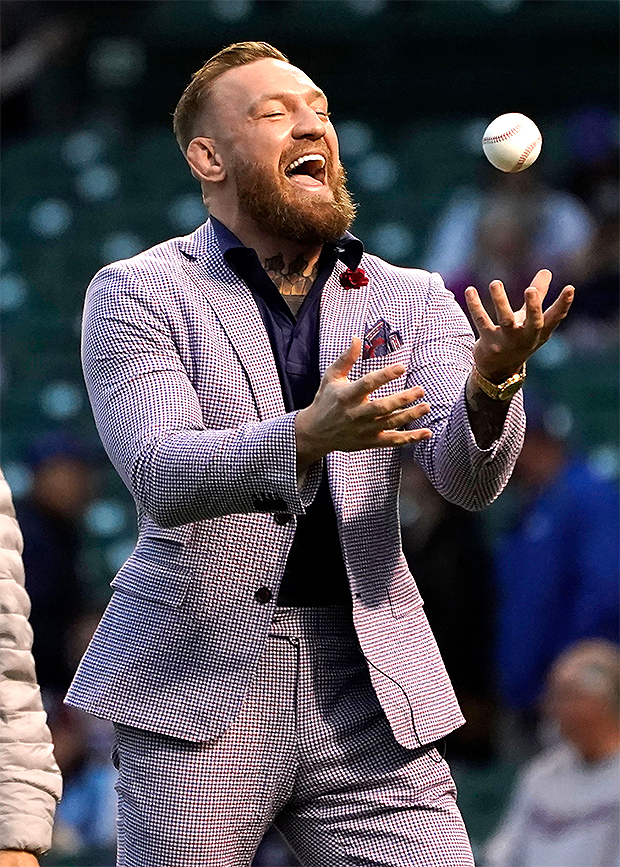 Conor later addressed his throw in an interview afterwards, calling it “the most devastating first pitch ever seen in the iconic Wrigley Field.” He also cited his broken leg from the UFC 264 in July as a reason for the mishap. Conor’s now certainly earned his spot among the worst first-pitchers ever group, which Carly Rae Jepsen (in 2013) and 50 Cent (in 2014) are also members of. Dr. Anthony Fauci‘s first pitch at the Washington Nationals game to kick off the 2020 MLB season was pretty bad too, if we’re being honest here. 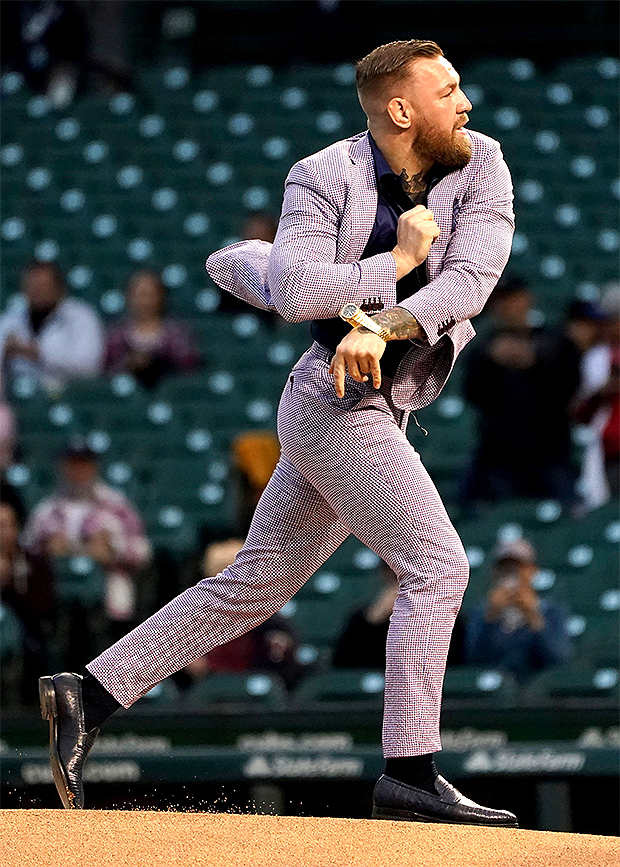 Conor’s disastrous first pitch comes after he nearly came to blows with MGK at the VMAs. The fighter and singer allegedly got into it after MGK declined taking a picture with the Irishman. Conor then pushed the rapper, and security held the UFC star back, after he’d spilled his drink. MGK’s security allegedly pushed Conor back, via TMZ.

After the incident, Conor swore that “absolutely nothing” happened when he was chatting with reports on the carpet. However, he still managed to briefly diss the “Bloody Valentine” singer. “I only fight real fighters —people that actually fight, you know what I mean? I certainly don’t fight little vanilla boy rappers. I don’t even know the guy. I don’t know anything about him, except that he’s with Megan Fox,” Conor said.