Minutes after sharing the video of the sinking boat on her social media account, the ‘WAP’ hitmaker informs fans that no-one was on board when the incident took place.

AceShowbiz –Cardi B watched a yacht sink while on holiday. While on the beach in an undisclosed location with her husband Offset, the “WAP” hitmaker captured the sinking boat on camera, and shared it on social media.

The 29-year-old rap star tweeted, “I can’t believe I’m actually watching a yacht sink. (sic)” In the video, which has been viewed more than one million times, the boat can be seen becoming submerged in the water while she expressed her shock as she witnessed the incident. 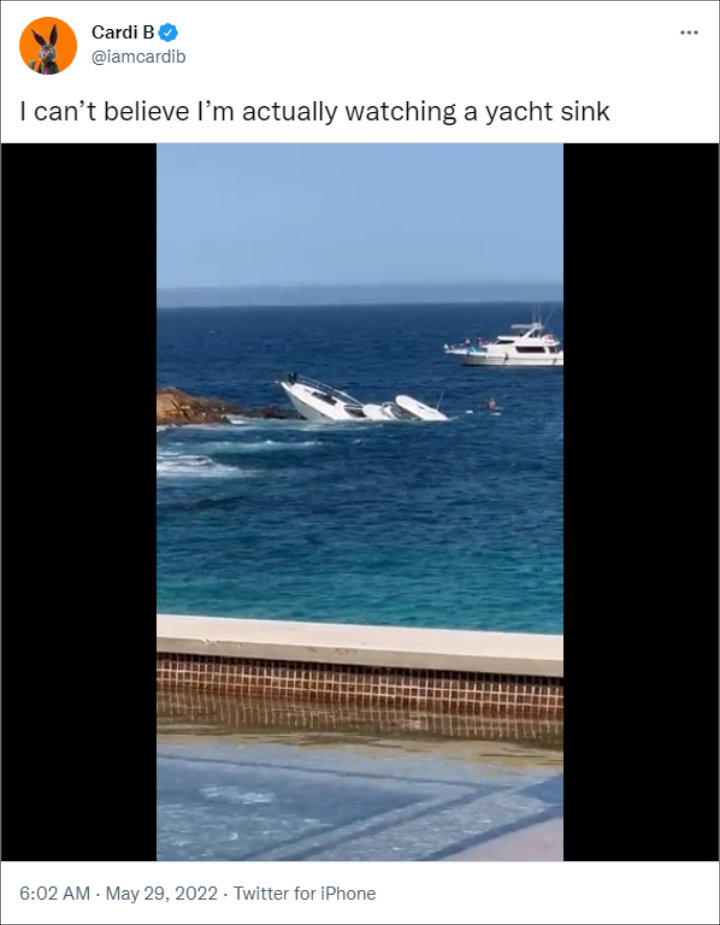 Cardi B tweeted a video of her witnessing the sinking of a yacht.

Just minutes later, Cardi took to her Instagram Stories to confirm that no-one was on board the ship when it started to sink. The raptress, who shares 3-year-old Kulture and 8-month old Wave with her husband, wrote, “A whole yacht sinked in front of our face. Luckily no one was in there. (sic)”

The incident came just days before Cardi is set to star in a new episode of Nickelodeon’s animated preschool series “Baby Shark’s Big Show” as a parody of herself named Sharki B.

The official synopsis of the episode reads, “In the special episode, Baby Shark and William meet the ferociously fun rap icon Sharki B, who is swimming into Carnivore Cove to perform her splash hit dance craze, The Seaweed Sway.”

“Sharki asks Baby Shark and William to show her around town before her big concert and perform The Seaweed Sway with her on stage that night. As hard as William tries, he keeps messing up the final move of the dance. Luckily, thanks to the help of his friends and his musical icon,” it goes on. “Sharki, William learns that the true secret to great dancing is doing it his own unique way.”

Cardi B’s episode of “Baby Shark’s Big Show” will air on Monday, May 30 on Nickelodeon.

Daniel Craig is made an honorary Commander in the Royal Navy

Tinashe Speaks on Being Considered a ‘Pop’ Star as a Black Woman: ‘I Fought Hard’