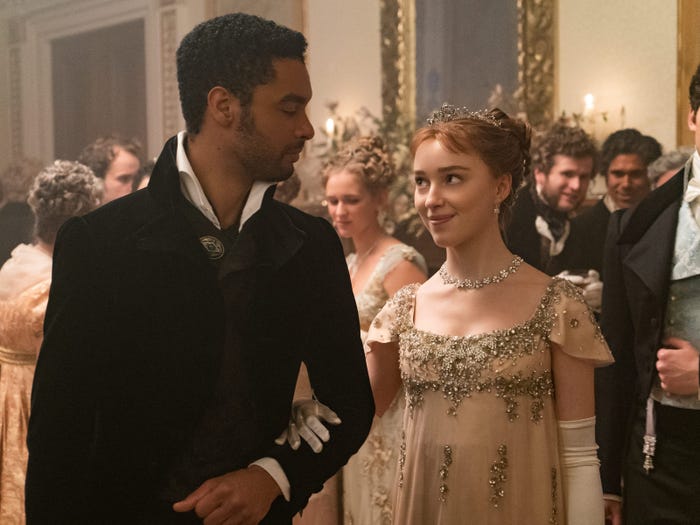 "Bridgerton" tackles topics like feminism, race, and sexuality in the context of early 19th century England. However, viewers are criticizing the showrunners for their handling of one issue in particular: consent.

The new Netflix series, adapted from Julia Quinn's 2000 novel "The Duke and I" and executive produced by Shondaland, follows Daphne Bridgerton (Phoebe Dynevor) and Simon Basset (Regé-Jean Page) as their temporary dating ruse evolves into a passionate marriage.

Daphne was always taught that she should want children, but in order to preserve her innocence, she never learned how to create them. Simon, on the other hand, swore he'd never sire an heir to his dukedom out of spite for his father's abuse when he was a child.

He tells Daphne that he "can't" have children, which she accepts, believing his reasoning to be a result of a medical condition.

It isn't until Daphne learns more about reproduction that she realizes he can impregnate her — he just doesn't want to — as she, and the viewers, realize he's been utilizing the pull-out method to avoid pregnancy.

She hatches a premeditated plan to initiate sex in episode six, positioning herself on top of her husband so that he can't remove himself, despite his blatant attempts to do so.

The scene is adapted from a controversial moment in "The Duke and I," though the events unfold slightly differently in the book.

On the page, Simon comes home drunk and Daphne feels an "intoxicating surge of power" and takes advantage of him, leaving him with a "complete loss of speech, this choking, strangling feeling."

Because the scenario upset many readers when the novel was published 20 years ago and people's understanding of consent has improved, many fans wondered why Chris Van Dusen, the show's creator, included the rape at all.

Beyond the lack of trigger warnings on the episode and the decision to keep the moment in the script, viewers claimed the shows' writers "glossed over" the rape, missing an opportunity to address timely issues like assault and consent.

Before this latest criticism, Van Dusen said he was well aware of the controversy surrounding the moment in "The Duke and I."

"We had a lot of conversations around that specific incident in the book," he told Entertainment Weekly. "And we did discuss it, a lot, as far as how to approach it and how to handle it."

However, Van Dusen viewed the scene as a pivotal moment in Daphne's character development and ultimately decided to keep it because "it's a part of her journey," he noted. Before shooting, he said the writers were intentional about how to show the interaction on screen.

"I've always called this first season of the show, if it had a subtitle, it would be, 'The Education of Daphne Bridgerton.' That incident really goes along with that overall — that overarching theme that she starts out as this picture-perfect, wide-eyed, innocent debutante," Van Dusen said.

The creator continued: "And we watch her grow into this woman who gets to shed all of the constraints society has held her to, and she finally figures out who she really is and what she's capable of."