“I think Anna was misunderstood in a lot of ways,” says Larry Birkhead, the former Hollywood photographer who dated Smith and now raises their daughter, Dannielynn, in Kentucky. Birkhead says the recent outpouring of public support for Britney Spears has inspired him to speak up again on behalf of Smith, who he dated for a brief period in the mid-2000s shortly before her death in 2007.

Speaking to Rolling Stone on the occasion of a new GUESS collection inspired by Smith, Birkhead says it’s his mission to “keep Anna’s memory alive in a positive way.”

Available now on guessoriginals.com (with select styles on sale at urbanoutfitters.com), the 32-piece GUESS Originals x Anna Nicole Smith Collection features apparel and accessories for men and women (think T-shirts, hoodies, denim and outerwear) and draws inspiration from a 1993 GUESS photoshoot starring Smith, which was shot along the ocean in Miami. The teal color of the water is woven throughout the new pieces, and Smith’s signature is digitized into each style. “Photo reel graphics” from a never-before-seen 1993 Anna Nicole calendar are also used as prints on a number of tops and tees in both the men’s and women’s capsules. 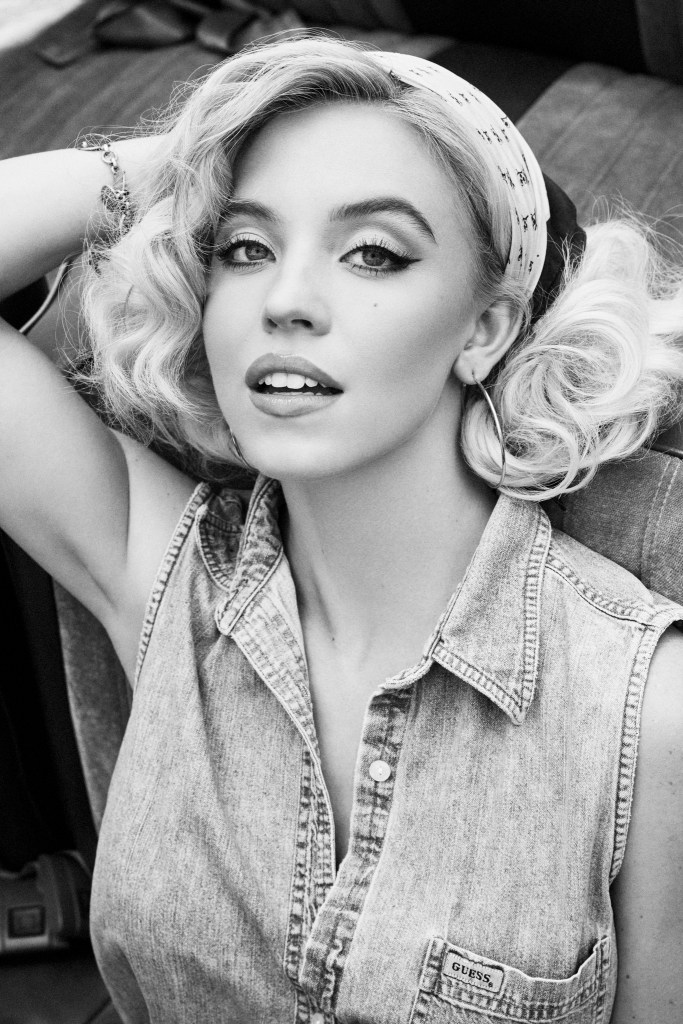 The collection was designed in collaboration with artist Cali Thornhill Dewitt, and the accompanying campaign stars Euphoria and White Lotus actress, Sydney Sweeney, who recreates classic Anna Nicole Smith shoots from early-Nineties GUESS campaigns. Pricing for the collection ranges from $12 to $248.

For Birkhead, the new campaign and collection proves that Smith was no flash in the pan. “I think it says a lot about Anna’s appeal and staying power that 15 years after her passing, she still has the appeal that an international brand like GUESS would invest in a campaign like this,” he tells Rolling Stone.

We talked to Birkhead about why he thinks Smith would’ve loved this collection, the challenges of raising their daughter Dannielynn (now 15 years old) during Covid, and why the recent support behind Britney Spears makes him want to tell Anna Nicole’s story all over again.

How did this GUESS Originals x Anna Nicole Smith Collection come about?

I spoke to [GUESS founder] Paul Marciano last year about the possibility of a new collection. We have collaborated in the past with GUESS on other Anna campaigns, but this is by far the largest Anna Nicole collaboration since her passing.

Did you say yes right away or were there any reservations about using Anna’s image so many years after her death?

Really we had no reservations working with GUESS. We do, however, always want to make sure that we partner with brands that reflect Anna’s fun personality and beauty, and we have in the past turned down branding opportunities that don’t align or fit with our vision. This campaign introduces Anna to new fans and makes her longtime fans happy. If it were something that we didn’t approve of, or I would think that wasn’t a fit for Anna’s brand and memory, we wouldn’t allow it.

But nobody knew Anna better than GUESS. After all, It was Paul Marciano that gave then-Vickie Lynn the name Anna Nicole! How can you say no to GUESS?

How involved you were and/or Dannielynn in the new collection and campaign?

We got to see the campaign before the launch to give our stamp of approval, but I let the fashion experts at GUESS do their thing [with the clothing]. The great thing with this campaign is that GUESS dug deep into the archives and found never before seen photos — that’s always a plus. Anna fans are always clamoring for new Anna items so this was an early Christmas present sorta for the fans, that keep her memory alive.

Dannielynn did say one word after seeing her mom’s pictures: “Iconic!” GUESS sent us several gigantic boxes of the collection. Me and Dannielynn are fighting over who gets what — she can have the purses; I want the hoodies!

How does Dannielynn feel about her mother still being in the spotlight almost a decade and a half after her passing?

Dannielynn was only several months old when Anna passed away. Ever since Dannielynn was a kid, I would take her in to the GUESS stores and she would look up at her mom’s posters almost as if she were looking up to heaven, and that’s how she really got to know her mom from those pictures. For me, quite honestly, if not one person were to buy the items [from the collection] but Dannielynn gets to see a billboard or a beautiful picture of her mom, then this campaign is worth it. 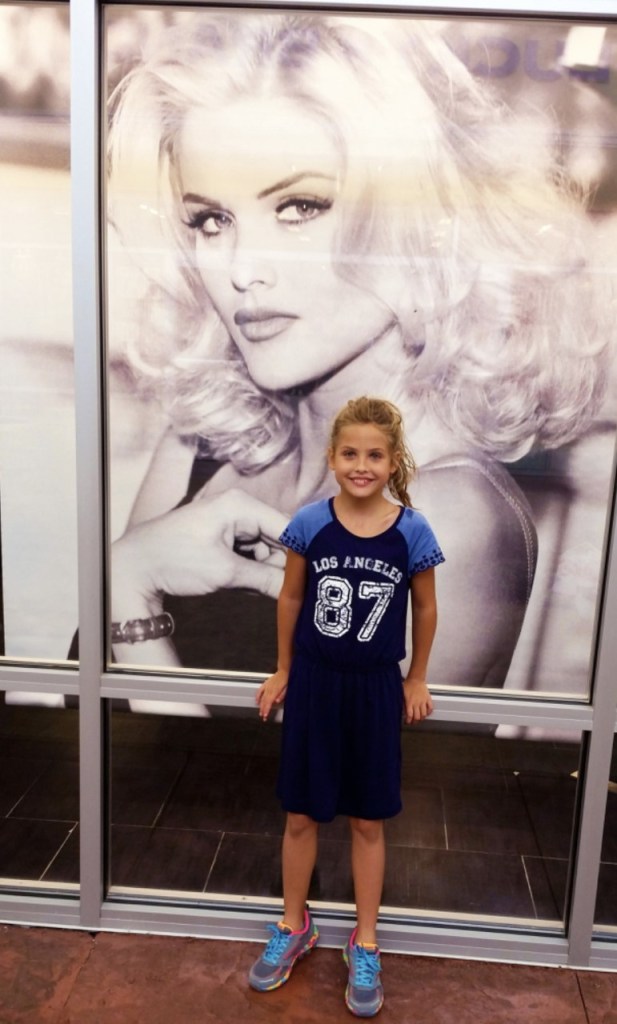 How do you think Anna would feel about being the inspiration for a new collection in 2021?

I remember going to Graceland with Anna in 2005. She was so excited to see all the Elvis merchandise in the gift shop. She collected Marilyn Monroe merchandise too. She had everything from Marilyn T-shirts and purses, to Marilyn switchblade knives! We actually were working on a lot of ideas and Anna merchandise before she passed.

If she were alive, she would be driving through Hollywood looking for her billboards and blasting Marilyn Monroe music and taking pictures with fans to celebrate this campaign. Anna would always say, “I want my face all over the place on things in stores.” She would love this; that she is being remembered.

Was Dannielynn familiar with Sydney Sweeney (who stars in the campaign)?

Dannielynn watches a ton of television and she likes Sydney. She thought the pictures were beautiful. Dannielynn did a campaign when she was younger for GUESS kids and she was the first multi-generational GUESS girl, so she knows what it takes to make a good campaign. She thought Sydney, “Nailed it.”

What about music? What do the two of you like to listen to?

Since Dannielynn was little she has listened to Loretta Lynn. We have become good friends with [Loretta] over the years. We have gone to her concerts and even got to sit on the stage while she played the Grand Ole’ Opry. Dannielynn even belted out Loretta’s hit “Fist City” with her sitting on her tour bus. We visit her when we can on her ranch in Hurricane Mills, Tennessee. She even sent Dannielynn an autographed guitar that she is learning to play. We love Loretta just like she was our own family.

Dannielynn has a very eclectic taste in music like her mom had. She likes everything from country, to rap and rock. She loves Aerosmith and Queen. She’s kind of like an old soul when it comes to her taste in music. Anna’s taste in music was just as wild. One minute she would turn on an Anne Murray [song], then the next minute she would have on Madonna, and go to sleep listening to Celine Dion.

What has the past year been like for you? How have you managed to stay creative during a pandemic?

Covid was challenging for us, but mostly for Dannielynn. Like many teens, she struggled with the lack of social interaction that she normally had at school with her friends. I struggled with having to become her teacher away from school and having to remember algebra!

I did spend a lot of time during Covid sifting through Anna’s personal archive of photos and videos and her personal diaries and journals. I am working on producing a definitive Anna Nicole documentary. I get tired of seeing people tell her story, when she left enough behind to tell her own story. It was pretty emotional going back on the journey.

Luckily for the project, Anna was a hoarder and kept everything! It is making it a little easier to help put together her story. I think Anna was misunderstood in a lot of ways. Now we are seeing stories about some of the women of Hollywood like Britney Spears, Brittany Murphy and Anna Nicole, that got a raw deal and were really treated poorly in the press and tabloid media. So for me, it’s vindication time for Anna.

This GUESS campaign is just the beginning. I hope one day it’s a brand that Dannielynn will want to manage and bring her vision on board to keep Anna’s memory alive in a positive way.