As a newcomer to the American Horror Story franchise, Aaron Tveit got to star in not one, but two very bloody installments of Ryan Murphy and Brad Falchuk’s spinoff, American Horror Stories. Following the premiere of episode six, “Feral,” the actor and 2020 Tony Award nominee hopped on the phone with ET to explain how he got involved with the series, how the pandemic allowed him to do more TV, including appearing on Schmigadoon!, and how he’s feeling about returning to Broadway in September.

“I’ve been a huge fan of all of the worlds that Ryan Murphy has created. He’s just really created these amazing worlds for actors to get to go play,” Tveit says. “And the American Horror Story franchise has been so successful and so different and varied year to year. So, I jumped at the chance to get to work on this where we approach different stories even within the same season.”

He adds, “And in my initiation to the world, I got to do a lot of really fun stuff.”

First premiering at the end of July, American Horror Stories opened with “Rubber(wo)Man Parts One and Two,” in which Tveit played Adam, a conniving handyman who seduces his way into the middle of Michael (Matt Bomer) and Troy (Gavin Creel).

“I was really there to challenge their relationship and see how far I can put a wedge in between them,” Tveit says of his character. Longtime friends of both of his co-stars, Tveit says he had fun mixing things up with Bomer and Creel. “The comfortability level is just off the charts, so that allows for you to kind of really go for things and really kind of test the boundaries of the story that you’re telling.”

And the wildest thing Tveit got to do as a performer was to go from seduction to menacing all in a matter of minutes, he says, pointing to the scene where Adam discovered a bunch of dead bodies in the wall of the couple’s home and then bludgeons his co-workers to death before turning to the two guys and telling them, “We’re now in this together.”

“It was such a blast playing this terrible person,” the actor says, noting how “I got to go from playing a real sociopath contractor to just a guy whose family falls apart after a tragedy and is kind of dealing with what happened.” 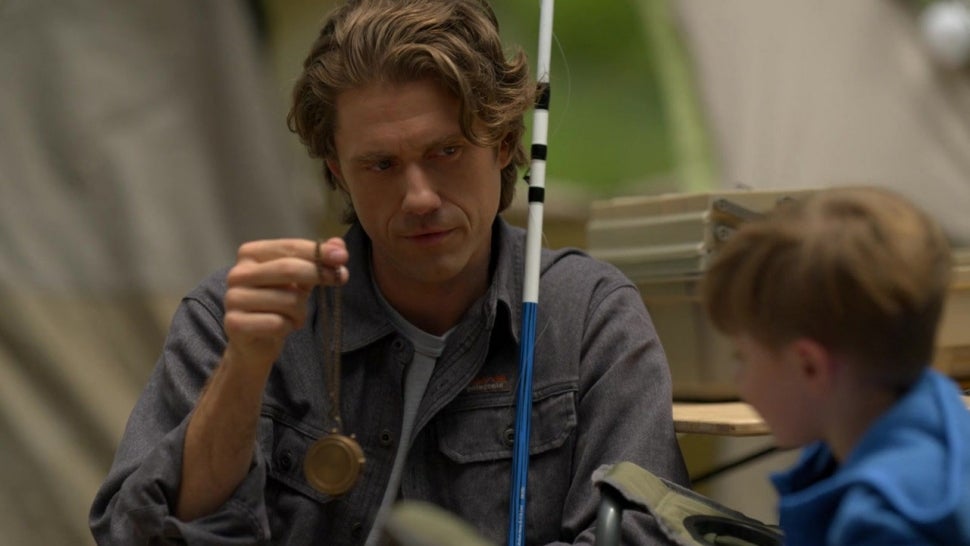 In season 1’s most recent episode, “Feral,” Tveit plays a father named Jay, whose child goes missing after a camping trip in the woods. Sometime later, they try to pick up the trail with the help of some trackers — but find themselves coming across something even more terrifying than they could have imagined.

Instead of filming on set inside a house, however, the latest episode took Tveit and the production out to Big Bear Lake, California. “It was kind of all going on a field trip together,” he says of shooting in the woods. “I love being on location in that way, because I feel like it really does so much of the work for you as an actor. Like, just being able to put yourself in that place. It just fills in a lot of blanks.”

As for which installment was the bloodiest, Tveit says it’s a toss up. “When I got killed in the first one, they did a shot where I was laying on the floor. So basically they had this whole rig and there was blood coming out at my neck from a tube in my back. All of the blood was pooling on the ground, on my face and my hair and everywhere,” he recalls.

“And then for the second episode, I had a gunshot for the last two acts of the episodes. So I had blood on all the layers of my clothing and it was coming down my pants. And it was a lot of blood and a lot of sweat,” he says. 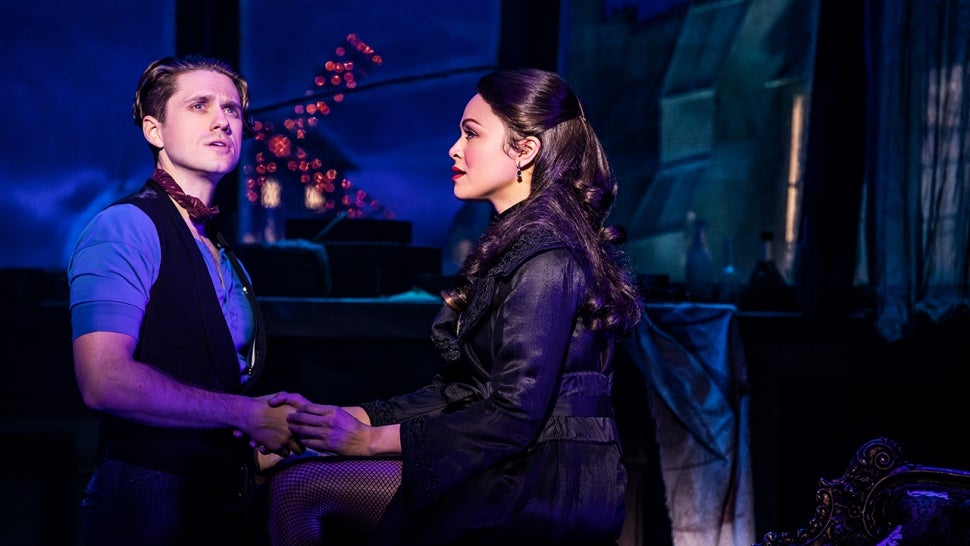 But all the mess was worth it, especially getting to work during the pandemic, after Broadway was shut down. At the time, Tveit was starring as Christian in the stage adaptation of Moulin Rouge, earning his first Tony nomination for the performance.

While many of his friends and co-stars were put out of work, Tveit was able to join both American Horror Stories and Cecily Strong’s musical Apple TV+ series, Schmigadoon!, as a rapscallion named Danny. “The fact that I’ve been able to work in television, I’m just so grateful for it,” he says, acknowledging that “if I had still been doing Moulin Rouge, I probably would not have been able to do Schmigadoon! or American Horror Story. So, you know, for me, this was a very lucky thing that happened.”

Broadway, however, will be reopening soon, with Moulin Rouge resuming performances on Sept. 24, just two days before the 74th Annual Tony Awards. And Tveit “can’t wait” to get back onstage and see the industry up and running again. “The fact that all the shows are going to be reopening and I get to see my cast and see other casts and just be a part of that community is a really special thing,” he says, noting how even more special it is “after it’s all been taken away.”

When it comes to the long-delayed Tonys, where he’s the sole nominee for Best Performance by a Leading Actor in a Musical, Tveit admits it’s a “unique situation to be in” but is mostly focused on an important moment to honor the incredible work of last season and celebrate what’s to come in the future. “It’s an opportunity for all of us to say, ‘Hey, Broadway is back and please come see a show,’” he says.

Simon Cowell 'Taking Longer To Heal Than Expected' Following Back Injury, May Be Laid Up Six More Months

Olivia Korenberg: 5 Things To Know About The Woman Who Married Seann William Scott