If you’ve ever been in a big-box gym before, you’ve seen plenty of guys doing classic leg exercises like squats and lunges and deadlifts. But there’s a good chance you’ve also seen a host of leg-training machines, one of which seems simple enough.

It’s called the leg extension machine, and depending on who you ask, it’s either an exercise that you should avoid altogether, or it’s a fundamental move you should do in every leg workout. The machine’s in just about every corner of fitness you can think of, from high school weight rooms to physical therapy clinics to big-box gyms — and very often, it has a line of people waiting to use it, too.

And why not, right? After all the movement is simple enough. You sit in the seat, let your calves loop around the leg roller, and straighten your knees, flexing your quads. It burns when you do it, and the burn is always good, right?

Well, sort of. Truth be told, the leg extension has a purpose, but that purpose isn’t for everyone. Depending on your goals, you’ll want to hammer the leg extension a few times a week, or sit it out entirely. Let’s break down the how and why.

The leg extension is an exercise designed to focus almost exclusively on your quads. Plenty of guys want big quads, which is why this machine gets major traffic. And your quadriceps, a blend of four muscles (rectus femoris, vastus lateralis, vastus intermedius, and vastus medialis) are responsible for leg extension, the straightening of the knee. The vastus muscles originate at the femur, where the rectus femoris is attached at the hip; the rectus femoris is also responsible for hip extension.

The leg extension offers an exercise that relies on torque to move a weight. While the quads are extending the knee, the weight is resting just on top of the ankle joint. In the same way that a lighter weight will crush your deltoids during a lateral raise because of how far the weight is from the muscle that’s moving it, the placement of the load, near your ankles, pushes your quads, which are straightening the knee, to work.

Unlike most of the leg exercises on today’s fitness landscape, the leg extension isn’t considered “functional.” Instead, it’s an isolation move that has its roots well before CrossFit, and these days, it’s often criticized.

If you’ve ever been to CrossFit, you won’t see anyone in the room doing leg extensions. You won’t see them in HIIT classes either, and disciplines of functional fitness often malign the exercise.

Instead, this move has its roots in bodybuilding. Bodybuilders have been adding leg extensions into their workouts since Arnold Schwarznenegger was training on Venice Beach. I also bought into the exercise when I started out in the gym. I mean, if Arnold does it, I should too!

Bodybuilders, however, have a specific purpose for doing the exercise. First off, they’re training purely for aesthetics, not performance, and a well-rounded set of quads is critical to a good physique. And earning size on a specific muscle (as opposed to your entire body) often requires you to focus on “chasing the pump.” (Not familiar with the pump? Here’s your rundown.)

The pump has its purpose. There’s some scientific truth to the influx of blood going to an area, and the hormonal response that follow building muscle. Most bodybuilding routines are rooted in pushing specific muscles to failure to do that, and the leg extension, which isolates the quads, forcing them to work with little assistance from other muscles, is a perfect example of that.

How often in your day do you have to extend your knee with maximum strength under load? Oh, never? That figures, which is why the leg extension is also popular and useful in physical therapy clinics. If you’ve ever had knee surgery (I have), you know that the quadriceps and rectus femoris often “fall asleep” in the days after surgery, and they need to essentially be “retrained”.

If other muscles can do the work, then the quads and rectus can’t experience that retraining. So the leg extension machine, because it isolates the quads and eliminates other muscles’ involvement, plays a critical role in rehab. The concept of getting the quads moving and the knee joint back to its hinging motion makes sense.

This makes it a good starting point for any rehab, although you can only take that so far. In the long run, your quads aren’t a muscle meant to work in isolation. So you can use the leg extension to “wake up” your quads after a surgery or traumatic injury, but at some point, it needs to learn to fire collaboratively with other muscles.

Should You Do It? 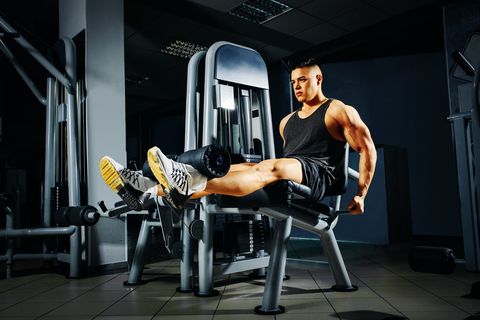 The leg extension just might be a fit in your workout; it all depends on your goals. If you are looking to really dial in to building a set of legs to impress the world, your will want to use the leg extension. If you have other goals, however, you may not want this exercise.

Then you want to do leg extensions. Again, you’re blasting your quads in isolation, and they’re going to flush with blood. And if you just want pure size in your quads, there is a benefit to getting a pump.

But that doesn’t mean you just need to do leg extensions. If you’re smart and you want big quads, you’ll utilize that pump more creatively. Start with leg extensions, then tap into moves that more closely mirror the everyday actions of your knee. Try this superset, which I love: Do 20 leg extensions, followed by 10 walking lunges with each leg. Do 4 sets.

One key to building your physique: Taking the muscle through concentric and eccentric contractions. One major benefit to the leg extension is that you can control the movement and focus on your quad. That means you can move with intent, slowing down the contraction at your pace and slowing it at certain phases. That can be done with squats and lunges, but it’s not quite as natural, or as easy to focus on your quads.

You Want to Avoid Joint Stress

Especially if you already have sore knees, you may want to skip this exercise. Again, the placement of the load relative to your knee creates a lot of torque, so this move sometimes isn’t worth it, especially if you’re not prepping for a bodybuilding competition.

Athleticism Is Your Goal

If you’re trying to run, jump, or play sports better, this isn’t a move for you. Most real-life leg actions don’t solely involve knee extension; even kicking a soccer ball, for example, starts with an aggressive drive of the hip, not the knee. If you’re training for a sport, ditch leg extensions in favor of moves like squats, deadlifts, lunges, and step-ups. 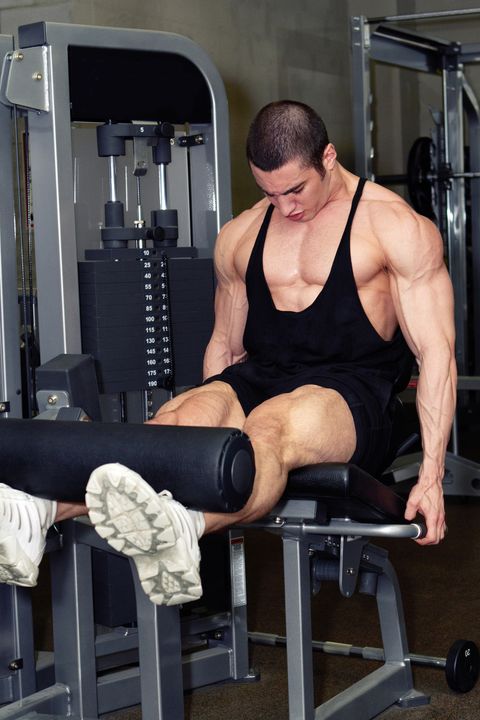 If you decided to do leg extensions, be careful with how you use and execute the exercise. Avoid these errors.

The leg extension as an exercise relies on the torque involved in moving the weight, so you don’t need to load the machine up to the max to get benefit. While the quads are extending the knee the weight is resting just on top of the ankle joint.

So you can benefit from not using too much weight. And maxing out the machine can have serious issues. In general, the further a weight is from the operating joint, the more the muscle and the joint have to deal with the torque. That means you will “feel” leg extensions in the muscle, but, if you use too much weight, you’ll also stress your knee joint over time. Be careful with throwing weight around; you want to protect that knee joint.

Leg extensions solely develop your quads, so in the long term, if they’re the main focus of your leg workouts, your legs will gradually develop imbalances. As your quads get stronger, you need to make sure to strengthen your hamstrings, too; if you don’t, you could easily develop knee issues or place yourself at risk for knee injuries when playing sports.

Remember how your legs work! Hamstrings, glutes, and quads are meant to work in concert, as are ankle, knee, and hip joints. Even bodybuilders who are chasing massive quads work in other exercises, using squats, deadlifts, and lunges as the backbone of their workouts. That doesn’t change even if you’re doing leg extensions. Keep the fundamental leg exercises in your workouts! (And if you’re not sure how to go about the squat, check out the video below.)

Hair Masks: 15+ Products That Will Revive Your Dry Strands This Season