Home » Beauty » Celebrities keep cutting their hair into mullets, and hairstylists say the controversial trend will continue to rise 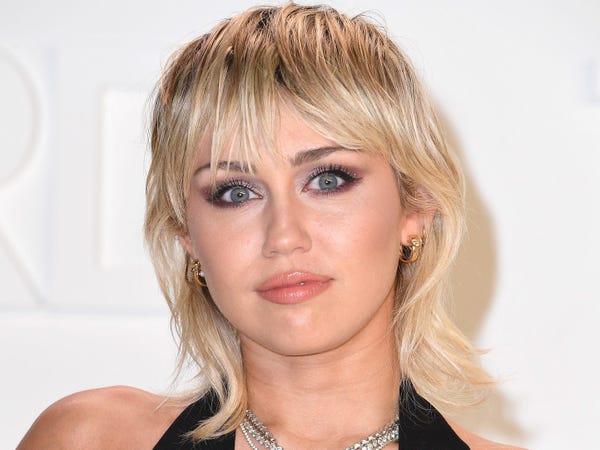 Celebrities are helping to bring back a controversial haircut: the mullet.

While mullets have a deep history that goes back to prehistoric people, Ancient Rome, and Native Americans, according to Dazed, the hairstyle became most popular amongst musicians in the '70s and '80s. The trend "quickly became taboo" by the '90s, though, as people began to see mullets as representations of being dirty and having a low income, the publication reported.

Now, however, the style seems to be everywhere. Miley Cyrus became one of the first modern stars to rock a mullet in November 2019. Months later, the haircut saw another boost in popularity as a result of Netflix's "Tiger King" docuseries. Some have even compared Cyrus' hair to that of "Tiger King" star Joe Exotic.

"Game of Thrones" star Maisie Williams was also recently photographed with a blonde mullet on Instagram, and Rihanna, Cara Delevingne, and more donned the style at the 2020 Savage X Fenty fashion show.

As it turns out, this influx of mullets is likely just the start of a burgeoning beauty trend. Here's what two hairstylists had to say about the style.

Ocean McDaeth, a hairstylist at New York's Art + Autonomy Salon, told Insider that mullets are typically shorter in the front and across the sides to frame the face, and longer in the back, starting at the ear.

The style, which she described as being the "cousin to the shag" haircut, also is meant to have "a lot of texture and layers on the top and around the crown area."

McDaeth said that while she's noticed "a higher demand" for mullets in the last few months, she's actually had "a steady clientele" of customers requesting the hairstyle in recent years.

The same goes for Lulu Richards, a senior hairstylist at The Lounge Soho in London. Speaking to Insider, Richards said she's always cut mullets for clients, though she has noticed the style being requested "by a wider range of people" — including older clients and those working corporate jobs — this year.

"Celebrities like Miley Cyrus and Maisie Williams have such huge audiences who have probably never seen a mullet on a female before," Richards said. "They're showing them that it can be a super feminine cut, but strong and empowering at the same time."

"The trend will never go," she added. "It never did — it's always been there."

In addition to celebrity influence, mullets are also trendy because they're versatile and require little work to style

McDaeth and Richards agree that there are "so many perks" to having a mullet. Richards particularly loves that you can frame your face with "cute fringe and delicate sideburns," while still "maintaining length" and having the ability to wear an updo if you desire.

"I think mullets are super trendy because they're so versatile," McDaeth said. "For example, growing out a pixie haircut is a lot less awkward when using a mullet to transition from short to longer hair."

McDaeth added that mullets are also popular because they typically require "super low maintenance" over time.

"A good cut should style itself, and will look good when worn messy in that 'rolled out of bed' look," she said. "But it should also look just as good styled and blown out."

If you're interested in getting a mullet, make sure to show your hairstylist lots of pictures of the style you're seeking

Before heading to the salon, Richards said you'll want to research stylists and find one who's experienced in creating mullets. From there, you'll want to share as many details as possible with the person cutting your hair regarding the look you want to achieve.

"Bring all the pictures," Richards said. "The main question your stylist will have is to how extreme to go. There is a fine line between a shag and a mullet, so make sure you've got your Pinterest board ready."

McDaeth notes that you should also let your hairstylist know about any patches that typically cause you trouble when styling your hair.

"If you know you have any serious cowlicks or growth patterns that give you trouble, communicate that to your stylist," she said.

Though mullets are popular amongst people with wavy and curly hair, McDaeth said the haircut can work on any hair type.

"Just make sure you're researching cuts that are similar to your hair texture so that you can have realistic expectations for your mullet," McDaeth said.

Once your hair is cut, you can use tools and products designed for your hair texture to achieve the best style from day to day.

"For super curly hair, get some curl cream in there and scrunch to get them bouncy and fresh — embrace your inner '80s glam," Richards said, adding that anyone with straight hair should use sea salt spray and diffuse "to get an edgy, textured mess that'll make you feel like a rock chick."

The biggest change you should prepare for, according to hairstylists, is a lot of chopping and cutting.

"Sometimes it can be a shock, but don't worry," Richards said. "It'll all make sense in the end!"

Hairstylists understand that taking the plunge to get a mullet can be a big change for some. Whereas some might be nervous about having shorter hair, others might be skeptical of embracing a popular trend. According to hairstylists, one of the best ways to combat these fears is to make your mullet your own.

"A stylist should be able to design a haircut that feels both on trend, and custom to you," McDaeth said. "If you're feeling worried about being too trendy, try changing up your color too."

Above all, you should try to remember that it's the "little details" like fringe, sideburns, color, and more that make your mullet unique, according to Richards. And no matter how you style your mullet, both Richards and McDaeth agree that the hairstyle is fun to have in and of itself.

"Be warned," Richards said. "Once you get a mullet, you'll become obsessed with your own hair."

The truth about the HydraFacial treatment